Since 1972, we’ve provided electrical services to the Savannah, Georgia and Southeast Georgia.  And since then, we have worked closely with our customers to provide electrical solutions that fit their needs. Click the tabs below and find out a little more about us and how we got to where we are today. 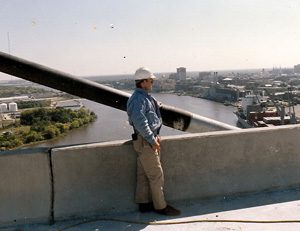 It all started with Frank Joyner who began his career as an electrician working for Union Camp.

Frank loved helping anyone in need, especially those who needed help with electrical work. His kindness and love for others grew into a desire to provide top quality electrical work in for the Savannah area. Frank worked after regular working hour with Union Camp, providing electrical work for friends and family. Charlotte Joyner, Frank’s wife, kept customers happy by dispatching the calls to Frank in the early years. When the calls were more than Frank could handle only in the evenings, the time came to end the day job with Union Camp.

Early on, Joyner Electric Company was known for the color of their trucks, which was “Hugger Orange.” Frank’s slogan “Don’t Be in the Dark, Call the Experts!” established a platform for delivering  expert electrical service.

Joyner Electric Company Inc. has been a family business since the start. Charlotte Joyner continued to answer phone calls and run the office as the business grew. Frank brought his son, Melvin Joyner, on many of the calls. Melvin grew up watching his dad perform electrical work. He continued to work with his dad and learned the hands on approach in the electrical field. Melvin gained his Georgia low-voltage unrestricted license in the mid 80’s.  Melvin’s wife, Kyndall Joyner, began to work with Charlotte managing the office in the late 1980’s. 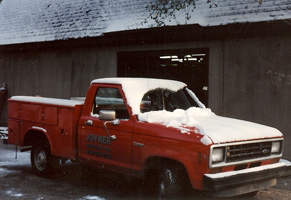 In addition to his first license he acquired in the 80’s, Melvin Joyner passed the Georgia Non-Restricted Electrical Exam to become a Master Electrician in the early 90’s.

In 1996, Joyner Electric Company had the pleasure of being a contractor for the Summer Olympics. 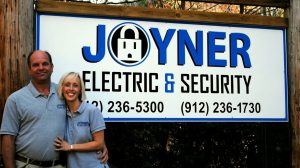 Melvin became CEO of Joyner Electric Company, Inc. when Frank and Charlotte retired in 2000. Melvin continues to provide top quality electrical and security work. He understands the importance of integrity when it comes to the electrical and security industry. Integrity is core to his belief system, while providing top quality personal customer service. Melvin has been able to continue the legacy of services his dad created.

In 2010, Joyner Electric Co. and Savannah Alarm Systems became Joyner Electric and Security Inc.  It was around this time that we wanted to change the way people thought of electricians so we really pushed for professionalism in the way we do business. 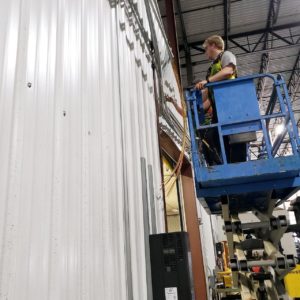 The Joyner family continued the family tradition. Chase Joyner, Melvin’s son, is followed in his dad’s and granddad’s footsteps and started running electrical service calls. Melvin’s daughters, Karoline and Katherine, have both worked for the business as well, either as an electrician’s helper or in the office with Kyndall. We have done it all! “No job is too small or too big”, Frank always said.

The company has made big moves to pour into the health of their company culture.  Joyner Electric and Security expanded their benefit options and started offering an apprenticeship program to helpers so they could have a better chance at advancing within the trade.

Joyner Electric and Security was named Best of Georgia in 2021 by Georgia Business Journal,  Neighborhood Favorite by Nextdoor, and a finalist in Savannah Morning News’ Best of the Coastal Empire.

We have big plans for Joyner Electric and Security and everyday we work to continue what Frank and Charlotte Joyner started in 1972.

Residential Electrical
From residential renovations to panel upgrades to rewiring, we've got you covered.

Commercial Electrical
We have the experience and knowledge to handle your commercial electrical needs.